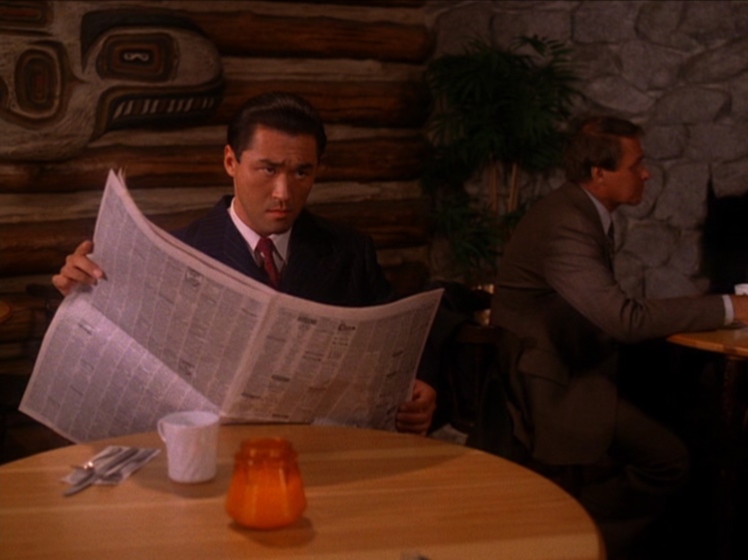 Inspired by the legendary Japanese film icon Ken Takakura, Mak Takano chose to become a film and television actor. Takano, who is mostly known as a martial arts expert and trainer, has starred in series like Alias (ABC, 2001-2006) and films like Mr. Baseball (1992) and Contact (1997). He has also worked as a stunt man on Black Rain (1989), but as an actor he is mainly remembered for his part in Twin Peaks. During the second season of Twin Peaks, a creepy Asian guy, claiming to be Josie’s cousin, would suddenly appear, and Takano used his martial arts training when playing that devious and dangerous character. I talked with Mak Takano about Twin Peaks and the different approaches of the different episode directors. Also, we talked about Asian characters and stereotypes in crime fiction, and we discussed the international impact of Twin Peaks – and television drama in a broader sense.

AH: How did you get the part as Jonathan, and could you describe the casting process?

MT: In fact, Harley Peyton is a friend of mine, and he said, “Why don’t you audition for this part, this Asian part?” Next thing I know, I get this call from Johanna Ray, and suddenly I’m called back to meet with Mark Frost and Bob Engels. I was so happy. It was a very sought after role for Asian actors, and it was a natural transition for me, and the fact that this character was a Japanese assassin of sorts suited me perfectly. Because of my background, it was perfect for me. I’m not a particularly business-like guy, but I have a background in martial arts, and that gave something extra to the role. Also, because I grew up in England, the British accent came natural for me. Hong Kong, as you know, was a British colony, and I think it was quite important that the accent was authentic.

I was cast by Mark Frost and Bob Engels because they had to move on with the casting process, and the first episode of the second season was coming up. At that time, David Lynch was in France – he was getting the Palme d’Or for Wild at Heart – and he wasn’t around. Therefore, I didn’t see him until the first day of shooting. On the day of the shoot, David just got back from France. Now, Bob Engels was originally very happy with me, but suddenly Bob came to me and said, “David doesn’t like you,” meaning that he didn’t like my head shot. This was the day of shooting, and now I was afraid that I was going to lose my job. I, therefore, went up to David to introduce myself, and the first thing he said was, “Hey, you look different from your head shot,” and then everything was fine. I think perhaps I was smiling at that head shot…

AH: I don’t mean to be rude, but in old crime and detective stories there was a tendency to trick the audience by having the culprit be a relatively unknown, Asian character. In fact, in 1928 a literary critic and author, S.S. Van Dine, said that it should be a rule for detective stories not to suddenly introduce a dangerous and devious Asian character. Do you think that Mark Frost and David Lynch were playing with this crime story cliché when suddenly introducing Jonathan into the mix, not to mention Mr. Tojamura?

Originally – I don’t know if you’ve heard this – Joan’s part [as Josie] was not written as an Asian woman. She was written as an Italian woman, and was probable meant to be played by Isabella Rossellini. But, as they changed that character and made her a Chinese woman from Hong Kong, they changed the rest of that plot accordingly. I think it all happened from the fact that Isabella Rossellini wasn’t cast, and that Joan Chen got it instead. I don’t know what their idea was, but they had some definite ideas, and the story could be a reference to something. The suits I wore were like older suits from a place in Hollywood, and the costume designer told me that David Lynch loves these old classic outfits. It could be a reference to the Japanese yakuza genre. They never talk with us about it, but all those people are very creative, and so I’m sure it comes from all of those people. They know their films, and they are really well-read.

AH: Could you say a few words on the Mr. Tojamura character? That was a pretty outrageous character, wasn’t it?

MT: The first day on set when Piper Laurie was introduced as Mr. Tojamura, there was no actor’s name on the call sheet, and usually the actor’s name is written next to the character’s name. We were just told that this was a Japanese actor who was very popular in Japan, and that struck me as peculiar, since I’m from Japan. Then, when I finally say Mr, Tojamura, I almost laughed my ass off because of that “fat suit,” that intentionally cheesy make-up. It was so clear to me that it was Piper. It was obviously intentional. Otherwise, they would just have done it like Mission: Impossible where we have two people playing the same character.

Piper Laurie as “Mr. Tojamura” and Joan Chen and Mak Takano as Josie and her alleged cousin Jonathan.

AH: On Twin Peaks, you worked with three different directors, i.e. David Lynch, Lesli Linka Glatter and Todd Holland. Could you describe what it was like to work with them? How were they different in terms of approach and directorial style?

MT: They’re all great, but their approaches to directing are quite different. It was just a dream for me to work for David. For me, the best movie of his is The Elephant Man, and I was happy to be part of one of his episodes. David is very intuitive, and he gives very interesting direction, sometimes not related to the character. In the very first episode of the second season, I have a scene with Cooper. I just remember I was doing it in two takes, and after the first take, David came up to me and talked to me about something totally unrelated. It seemed strange at the time, but it forced me to get into a different mental state, and perhaps that was his intention.

Todd Holland is more methodical. He had everything lined up. At that time, he was one of the biggest up-and-coming directors. He knew exactly what he wanted to do with the flashlight and the “blood brothers”-line.

Leslie, to this day – and I’ve worked with great filmmakers – is my favorite director. Hands down. I connected with her. She actually lived in Japan for a while on a cultural exchange. I’ve never had a director calling me the day before working with me, but Leslie did. She called me and said, “Hello, I’m the director, and I call all of the actors the day before we meet.” She was so passionate, and she was so hands on. The rape scene with Joan Chen was nominated by the Directors Guild as the best episode, and, in large part, that was because of Leslie’s passionate directing style. She would really direct me, hand on, and for me, as an actor, she treated me like I was really important. She is more hands on with all of the actors, and she treats everyone equally.

AH: There is a great fighting scene with you an Chris Mulkey (as Hank Jennings). In that scene, you got to use your martial arts experience. Could you say a few words on that scene?

MT: They let me do what I thought was appropriate. I was fortunate that I could help create my own choreography. I wanted Jonathan to look like a professional killer or assassin, and Todd Holland agreed to that. It was a pretty long fighting scene for a television show. 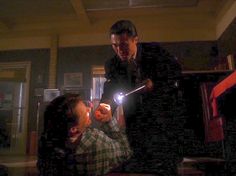 A shot from a cool fighting scene in Twin Peaks, in which Mak Takano utilized his expertise in martial arts, and a famous shot from Takano’s favorite film by David Lynch, The Elephant Man (1980).

AH: Many characters changed during the second seasons, and there were many strange digressions and occurrences, some of which were also haunting. You have mentioned Joan Chen’s character a few times. What do you think happened to her?

MT: [He laughs] I don’t know what happened to Josie. It was a very strange, surreal ending to that character. Maybe, and I don’t know if this is true, Mark and David knew that the entire show was being canceled, and, therefore, they chose that kind of ending to Josie’s character. Maybe Mark and David have an answer to that question – “What happened to Josie?” – and maybe they don’t.

AH: Why do you think that the ratings of Twin Peaks dropped during the second season?

MT: There were so many things going on during the second season, and so many decisions were made by the executives. When the rating dropped just a little, they changed the air time. They changed the day. That was one of the things that affected it. Add to that the surreal direction that the story took, and then you potentially have some bad ratings.

But I think now things will be different. By now, there are so many fans.

AH: Twin Peaks has often been described as one of the most important and influential TV series of all time. Do you think that it has had an impact on modern television drama?

MT: It’s been a big influence in many countries. I was born in Japan, and I grew up in England, but, then, I went to The States for graduate school. I used to go back to Japan often to visit my parents, and Twin Peaks was really influential in Japan, at least. It definitely changed the standards, from the very first episode which still, to me, is the best thing ever on TV. That pilot was basically a movie, and from that point forward Twin Peaks really kind of changed the whole way TV was made. People started to take more risk, I think, and they started getting influenced by the whole show in general. It was far from a typical detective or police show, and it was quite different from the standard family shows which are so typical in the US. And now, with pay or cable TV shows on HBO and Showtime, it seems evident that Twin Peaks was influential. I think, truly, that the beginning was Twin Peaks. It was a forefront of a very surreal, different kind of television, and it changed everything. At that time, the standards were set. It may be a little more open in Europe, but it’s more controlled and restricted in the US. For David Lynch and Mark Frost to push it that far at that time is just incredible. It was the forefront, and Mark and David were the pioneers.

AH: What do you think about the upcoming third season, and what difference does it make, in your estimation, that the show is being revived on a premium cable network like Showtime, not a broadcast channel like ABC? Is it likely that you will be a part of it?

MT: I don’t know much about it, but when it was announced my brother sent me an e-mail, saying that I will be present day. It will take place 25 years after the ending of the original show. I’m sure it’s gonna be very strange, but it will be interesting. Showtime is going to play all of the episodes from the past two seasons next year, before airing the new episodes. A lot of new fans will emerge.

AH: What does the future hold for you? Will you be coming back as Jonathan, or will you be focusing on martial arts?

The strange and surreal ending to Josie’s character, as mentioned by Mak Takano: